Social Share:
A Comparative study of Role of NABARD with co-operative Banks and their recommendation
2022-06-06 11:37:28 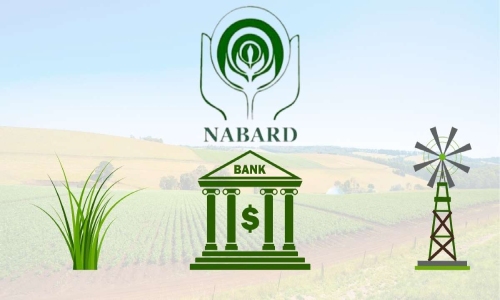 Role of In 1969, the Indian Government had thought of changing the old framework of the financial system by shifting away from a single agency approach to the multi-agency approach including commercial banks (CBs) with a new look at the procurement in existence for agriculture credit. A mandage is issued about the nationalization of 14 major CBs in 19 July 1969 and another six banks in 15 April, 1980. In this sequence, the Regional Rural Banks (RRBs) were set up in 1975 in order to have of special attention on marginal and small farmers, agricultural labours and rural artisans.
The Gadgil Committee, which was an agriculture finance committee, has given the idea of an All India Organisation for Agriculture Development. But the All India Rural Credit Survey Committee (1951-54) and the committee on co-operative credit was not in the favour of such any organization for agriculture development. Once again, the All India Rural Credit Review Committee in 1960 and the Administration Reforms Committee in 1970, denies the proposal of a separate bank for agriculture development. In 1976, The national commission on agriculture insists on integrating the total credit structure for financing Agriculture and Rural Development and exhorted RBI to establish an Agriculture Development Banks of India (ADBI) for meeting its purpose.
The RBI constituted a "Committee to Review Arrangement for Institutional Credit for Agriculture and Rural Development" (CRAFICARD) in March 1979, at the instance of government of India under the chairmanship of B. Shivarman. The committee went through the all pros and cones for establishing of National Banks of Agriculture. The committee disagreed the proposal to setup such a National banks which works like Industrial Development Bank of India (IDBI) and which provides only long term funds. The committee reached at a conclusion that for setting  of National Bank with close link with the RBI which will provide long term and short term credit both. The committee thought the role for the RBI as one of spewing, festering and nurturing the new Banks. CRAFICARD was approved by Government of India and RBI both and consequently the NABARD act was passed in parliament on the 1st Dec. 1981. The Hon'ble Prime Minister Smt. Indira Gandhi dedicated the Banks, which came into existence on 12th July 1982.
Rural credit cooperative in India was born more than 1000 years ago as a state initiative with promulgation of the Cooperative Societies Act by the then British Government. Cooperative Credit Societies were organized with the only purpose of offering credit to the farmer members at a reasonable rate of interest to emancipate them from the grips of money lenders. After the amendment of the Cooperative Societies Act in 1912, the Cooperative Credit Societies were federated into Central Cooperative Banks (CCBs) to mobilize resources to meet the credit requirement of its farmer members.
The role of Co-operative banks is very important in meeting the credit needs of both the urban and rural India. Despite the fact that these institutions account for small share in the total business undertaken by the banking system in India, they take a significant and prominent place in Indian financial system as they cater to different demographic categories and geographic locations. Co-operative banks with their large banking network have not only supplemented the commercial banks to strengthen the financial intermediation by bringing a large number of depositors and borrowers under the formal banking network, but have also enabled the people from low and middle-income groups, both in rural and urban areas, to have access to banking services.
The cooperatives in India generally have three-tier structure in most of the states with primary agricultural credit cooperative societies (PACS) with farmers as their members at the base level, districts cooperative banks (DCBs) as the intermediate federal structure with PACS as principal affiliated members, and the State Cooperative Bank (StCB) at the apex state level with CCBs and other cooperatives as its principal members. This three-tier cooperative credit framework is famously known as the short-term Cooperative Credit Structure (ST CCS). The ST CCS functions as a three-tier structure in 16 states; while in 13 smaller states & union territories, PACS are directly affiliated to the StCB and the ST CCS functions as a two tier structure. In 3 states, a mixed structure, i.e., two tier in some districts, and three-tier in the other districts operates (RBI Report, 2012).
The term 'social banking' denotes to a policy of induced credit delivery by banks to economically weaker sections of the society as recognized from time to time. Following suggestions are made to realize the objectives of social banking in the study area.
The situation warrants participation of the borrowers in the planning of lending activities which alone can bring down misutilisation and default in repayment. Organisation of the borrowers is the alone way to make the ground level lending a success, in this regard, the SHGs have served as an alternative strategy of banks in reaching the poor.

While the role of National Bank in increasing the flow of ground level investment in agriculture through credit support had been significant, a lot remains to be done for promoting non-farm investments in the rural areas by devising suitable credit packages. Several promotional measures had been taken for skill and entrepreneurship development for promoting micro enterprises in the rural areas. Further, to improve the productivity of investment credit, the flow of production credit needs to be further accelerated.
Another area, which will need focused attention in the forth-coming years, is institutional development. The National Bank has to pay more attention in the years ahead in building institutions at grass-root level in order to ensure that the credit absorption capacity of the system is improved. The National Bank will also have to devote greater attention to effectively meet the training needs of its own staff as also those of the client banks.
Evaluation of NABARD schemes by outside agencies should be encouraged. The funding of such studies will help NABARD to learn useful lessons from the experience of development schemes and to make necessary changes in operational policy and procedure with a view to improving the overall performance and impact of schemes.
It concluded that NABARD has acted as an apex refinance institution as well as development institution in the field of Rural Development. It has devised many measures and created gross-root level institutions to support the implementation of the national policies for increasing agricultural production, employment generation in rural areas, income generation from efficient use of local resources, reduction in regional imbalances and social imbalances through credit based area specific programs improving credit absorptive capacity of banking system and improving the quality of lending from proper control of technical and financial parameters and propagation of repayment ethics. The measures suggested in the study would go a long way in further improving the operations of NABARD and realizing the objectives of National Bank namely gearing up credit dispensation for improving production and productivity in rural areas.