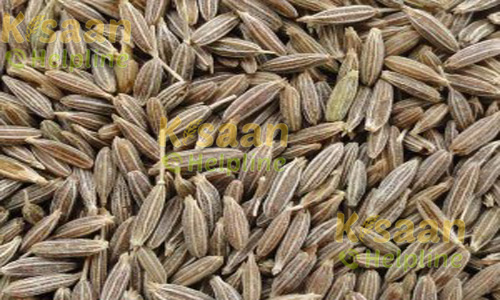 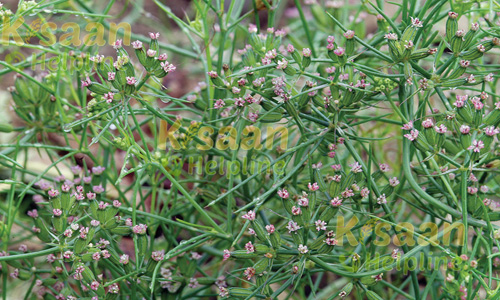 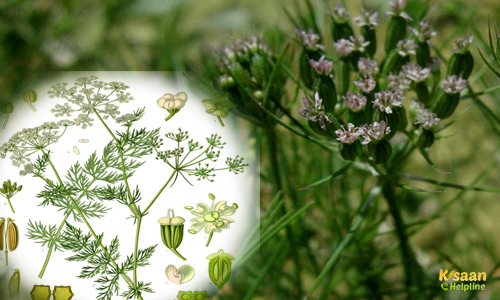 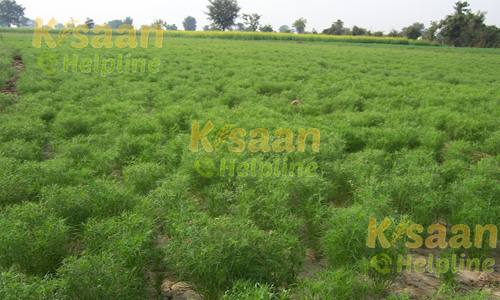 Introduction
It is popularly known as zeera or safaid zeera. Cumin constitutes a principal condiment crop owing to its strong aromatic odour and a spicy taste. It is regarded as one of the oldest spices known since Biblical times. It is used as flavouring compound in variety of culinary preparations. The short duration of growing and high net returns are added attributes behind the preference and popularity of the crops among the farmers.

(I)In food flavouring-The seeds are largely used as condiments in the form of an essential ingredient in all mixed spices and in curry powder for flavouring vegetables, pickles, soup, sausages, cheese, other culinary preparations and for seasoning breads, cakes and biscuits. Cumin seed is common ingredient of flavouring of zal-zira, a common drink during summer.

(ii)In medicine-Cumin seed is stimulant, carminative, stomachic and astringent. It is useful in diarrhea and dyspepsia and as such finds many uses in ayurvedic and veterinary medicine.

Botany
Cumin is an annual herb which usually attains a height of 20 -30 cm. Over the main stem, the plant produces 3 -5 main primary shoots which further give rise to 2 -3 secondary branches. The shoots are arranged in alternate manner & all shoots attains similar height on the plant which gives uniform look to the entire plant.

Soil and climate-
It can be successfully cultivated on well drained medium to heavy textured soil of average to high fertility. The crop thrives well on deep, friable, medium and well drained soil in mild climate. However, continuous cropping of cumin in the same field is not desirable because of the problem of soil borne diseases particularly wilt.

Sowing
The proper time for sowing is from mid November to first weak of December. Patil and Pillai (1983) observed that incident of cumin blight higher in crops sown in November than those sown in December-January. Infestation was least when the crop was sown in second week of December. The seeds may be treated with suitable fungicide @ 2g/Kg of seeds. For cumin 12-15Kg seed is considered as sufficient for 1ha. Seeds may be sown either by broadcasting method or in lines. The seeds were sown in lines drawn at distance of 1cm, 22.cm, & 30cm.

Irrigation-
Light irrigation should be given immediately after sowing followed by another irrigation after 8-10 days. Germination will starts only after second irrigation. The first irrigation should not be heavy; otherwise it results in uneven distribution of plants. However if the day temperature is high with dry spell, a third irrigation may be given after 4-5 days to allow completion of germination. There after the crop should be irrigated at an interval of 20-30 days depending upon the weather condition and soil type.

Manures and fertilizers-
FYM @ 15-20 tones/ha may be applied as basal dressing during the land preparation. Fertilizer dose of 50Kg nitrogen and 20Kg phosphorous may also be applied per ha. The crop did not respond to the application of potash during Rabi season in Rajasthan condition.

Harvesting and yield-
The crop matures in 80-120 days depending upon variety and agro-climatic conditions. The harvesting is done when the crops turn yellow, leaves fall down and seeds turn light grayish brown. The crop is harvested by uprooting the individual plant or by cutting it close to the ground during the last week of March or the first week of April.

Processing-
After harvesting the crop is stocked on threshing flour in a thin layer to facilitate drying. The dried stock is beaten manually with stick to separate the seeds from the plants. The separated seeds are cleaned using sieve and filled in gunny bags. Generally cumin seeds are processed after drying in sun. The seeds should be dried to a moisture level of 8.5-9%. The harvested stock of cumin can also be dried at 60°c under dehydrator.